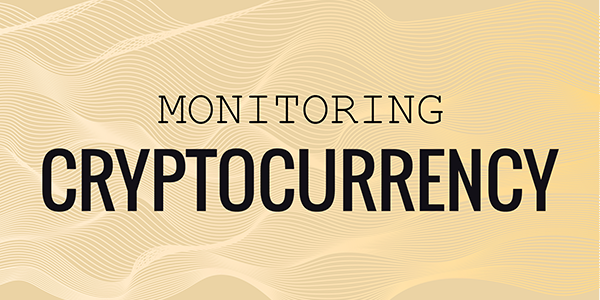 Bitcoin, the first and largest of the world’s cryptocurrencies, may have recently taken a dive, but if the past few months of wild fluctuation are any indication, it may not be that way for long. Since the recent price spike in mid-December, where bitcoin prices tripled in the span of a month to over nineteen thousand dollars, virtual currencies have risen to the level of being a household name.

Despite all the recent hype surrounding cryptocurrencies, many are still confused as to what exactly they are or how they work. The best primer for those looking to learn about it may be to go to the source itself, the original whitepaper authored by bitcoin’s founder Satoshi Nakamoto, which outlines the conceptual foundations of blockchains and digital currencies.

One of our sales techs at Nagios, Shamas D. (who is a cryptotrader himself), describes cryptocurrency simply as “a digital asset which enables you to transfer value quickly and securely with others on a blockchain. Blockchains are the distributed ledgers where all of the transaction data is stored, and upon which new transfers are facilitated”.

The decentralized, anonymous and volatile nature of virtual coins, enabled by blockchain technology, has historically made them popular for off-the-books transactions and currency speculation for the curious. However, the now-apparent potential for massive returns on bitcoin and other virtual currency investments has resulted in a digital gold rush with lay-people and career investors alike testing their hand at cryptocurrency trading. This has ushered in a new era of legitimacy for cryptocurrencies like bitcoin, with many major companies now accepting bitcoin as payment.

For those of you who have already staked your cryptocurrency claim and are now along for the wild ride of price fluctuations, you may have developed a habit of obsessively checking the price of bitcoin as it rapidly changes (sometimes by thousands of dollars a day).

With this in mind, one of our support team members, Craig Dienger, has written a Nagios plugin specifically for monitoring cryptocurrency prices via CryptoCompare.com, including the ability to chart price data and send alerts on price thresholds. “Bitcoin and cryptocurrencies have been in the news a lot lately and I already had created a plugin to monitor stocks. After a few minor modifications to that plugin it was able to monitor crypto prices” says Dienger.

After installing the plugin, you can customize a number of variables—including which cryptocurrency you’d like to monitor, which real-world currency you’d like to convert to, as well as warning and critical price thresholds to be alerted on. The graphing feature allows you to look at prices charted over time. The price-alert function may prove to be an especially valuable feature, potentially leaving some of the obsessive checking in on instable crypto-prices to Nagios. When asked about cryptocurrency trading tips for newcomers, Shamas said “Have fun with it! The market is highly volatile, but holds a lot of opportunity for people who navigate the volatility calmly. Don’t invest money you can’t afford to lose and you’ll be a lot less likely to panic during the wild price swings that are surely ahead”. And as always, buy low and sell high.