A North American logistics services provider (LSP) needed an infrastructure monitoring tool that would easily monitor operations across its subsidiaries. The IT director was the sole person in charge of serving 300 employees, 50 servers and 13 work sites.

Why Nagios: Clear Reports and Graphs Help IT Tell the Real Story

“I love the stats and graphs Nagios XI gives me,” he said. “I can give that to my leadership team to prove how the network is performing and what’s proactively being done. Considering the time that Nagios XI saves me personally, the cost is a no-brainer.”

Today, with still just one IT person, the LSP can monitor all servers and stations, as well as dozens of hosts and more than 430 services with Nagios XI.

“Sure, I’d rather not be the only IT guy, but Nagios helps me monitor everything,” said the director. “I’m a Linux guy by training and now I work in Windows, so the Nagios installation process went pretty smoothly. If I have an issue, I call my Customer Success Manager and things get resolved quickly.”

Preventing a ransomware attack – before the MSP even noticed

Like so many companies, the LSP dealt with a few ransomware attempts in recent years. One attack resulted in a 70 percent infection rate, causing the IT director to go to backups to recover 70 percent of the servers.

The director gave virus scan control and DNS protection to the managed service provider (MSP) to help watch for and prevent ransomware attacks.

A few months later, Nagios XI alerted the company that its servers were getting failed login attempts. “I didn’t even buy Nagios as a security tool, but there it was,” said the director. After digging around the database servers, he found an end user’s account was trying to connect in a way that the company didn’t use. The industry often see attempts to access public facing hosts. In this instance, it had to be ransomware because there were so many attempts across many servers at the same time.

The virus had made it through the MSP’s virus scanners and the LSP wouldn’t have known about the attack until it was too late.

“I’ve never been happier to have an infrastructure monitoring tool like Nagios,” said the director. “The virus infected one other computer, but I caught it after that and had everything fixed in less than 30 minutes because I knew which VPN to disconnect. Nagios gave me log-on errors, so I knew exactly what to look for in the server. I could identify the user ID that was trying to connect and I knew the exact site I needed to target. That was an amazing day.”

A full view of the network without breaking the bank

Thanks to Nagios XI’s ability to monitor and alert on nearly anything imaginable, system admins can work proactively to fix network issues and reduce downtime. Nagios has saved the company from outages because of its alerts. “I really appreciate the power it gives me as a one-man team,” said the director.

An organization can’t be successful if it doesn’t know what’s happening in its IT infrastructure, but the monitoring tool has to be affordable. The LSP had received a quote for a $5,000 per month security service that potentially might help if a specific security breach happened. But Nagios XI, at a fraction of that cost, keeps the entire environment running. “I know everything that’s going on,” said the director. “It’s all about making my job easier.”

Transporting goods across national borders requires precise electronic documentation with no room for error. If a truck shows up and the border guard doesn’t have the documentation ahead of time, it may be a large fine. The LSP uses Nagios XI to keep tabs on whether the paperwork is getting submitted and accepted.

When a partner sends the LSP the required paperwork for a load, an employee fills out the information and transmits the EDI file to a customs broker via an FTP client. “Every once in a while, Windows stalls out on a task, so that caused us to either not get the paperwork or not be able to send it to the customs broker to get approval for the loads,” said the IT director.

He realized he needed to monitor the file in a folder, and set up monthly monitoring of that folder with Nagios XI. He created a custom process that rotated monthly logs and set up Nagios’ NRPE wizard for Windows to monitor the folder. He even found other applications to monitor with this approach, such as other FTPs.

“It’s really the ultimate infrastructure monitoring tool, and it has helped us be more proactive because I can go in and give Windows a kick before anyone notices,” he said. “I call Nagios the ace up my sleeve!” 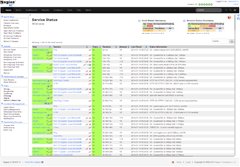 Designed for scalability and flexibility, XI is designed to make problematic IT monitoring tasks simple, while retaining the powerful attributes of its enterprise-class foundation blocks.